Black, red and gold in front in the Dressage Nations Cup for Juniors and Young Riders

Home  >  Allgemein   >  Black, red and gold in front in the Dressage Nations Cup for Juniors and Young Riders 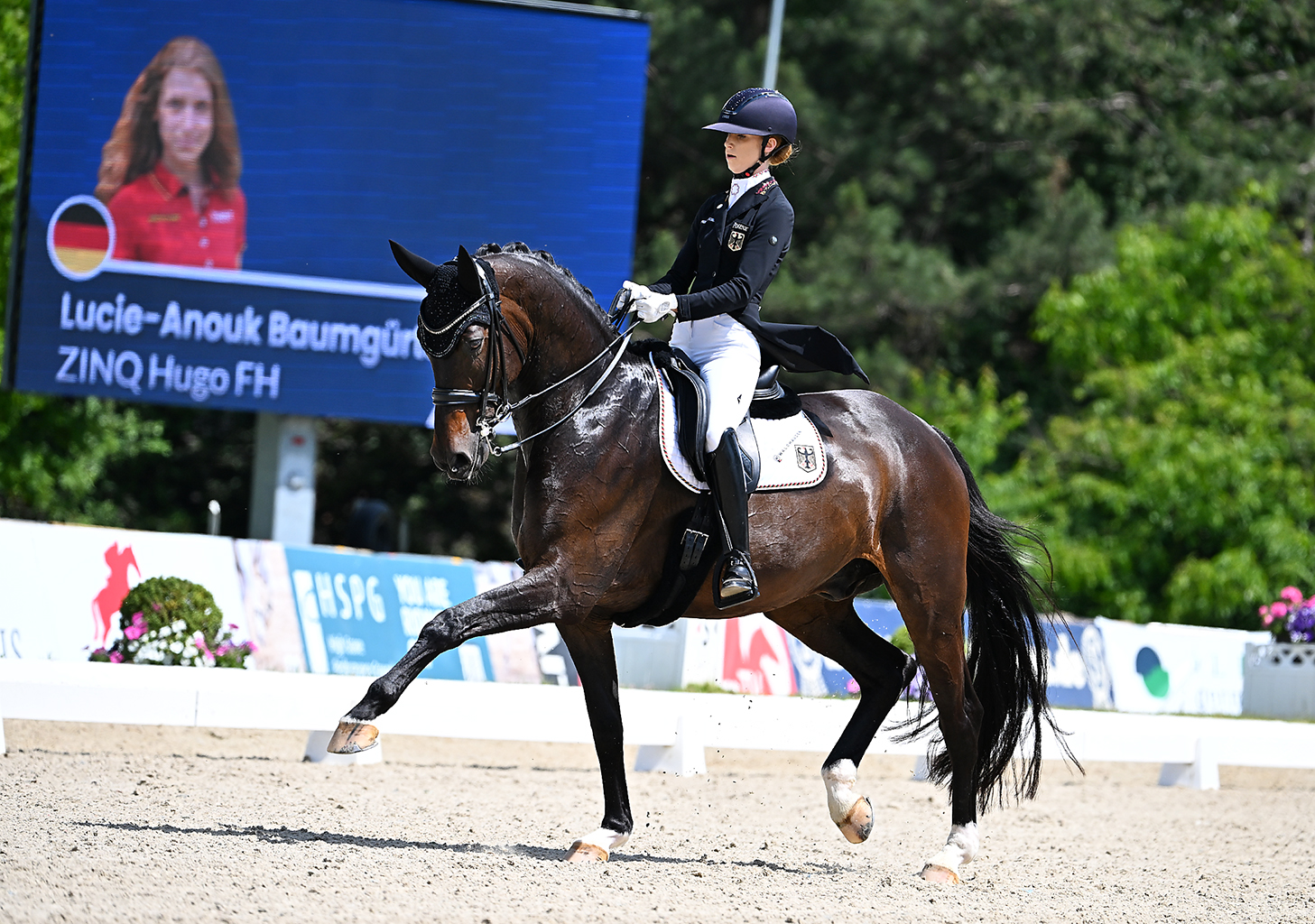 16 Jun Black, red and gold in front in the Dressage Nations Cup for Juniors and Young Riders

Hagen a.T.W. — Future Champions always offers one thing above all: sport, sport and more sport from the world’s best young riders in dressage and jumping. While the show jumpers competed in the main stadium, dressage classes were held in two arenas at once. These included the Nations Cup for juniors and young riders, presented by the Liselott and Klaus Rheinberger Foundation. The top step of the podium shone in black-red-gold in both age groups: Allegra Schmitz-Morkramer, Lana-Pinou Baumgürtel and Rose Oatley took the first place in the Juniors, while victory in the Young Riders’ U21 age group went to the team with Lucie-Anouk Baumgürtel, Helena Schmitz-Morkramer and Jana Schrödter.

Lucie-Anouk Baumgürtel also spoke for her teammates when she said after the prize giving ceremony: “I am very grateful to be able to ride here. The conditions are simply top and the participants are really great, coming here from all over the world.” Close on the heels of the German riders in both Nations Cups was the competition from Denmark. Sophia Ludvigsen, Frederikke Gram Jacobsen and Kristian Würtz Green competed in the young riders competition. The junior team for Denmark was represented by Johanne Kofod Jensen, Sophia Boje Obel Jorgensen and Thilde Rude Hare. The French team also placed among the juniors: Mathilde Juglaret and her team mates Anna Dupuy Pelardy and Lucie Planchet were delighted with their third place. In the young riders competition, however, the riders of the Spanish team around their national coach Jenny Eriksson were jubilant. Sergio Moron Casco and his team mate Natalia Bacariza Danguillecourt rode under the Spanish flag.

In the CSIOY Special two-phase jumping competition, presented by OSNATruck Nutzfahrzeuge GmbH, the German young riders showed themselves strong and prevailed over their competitors. Maren Hoffmann was particularly fast and clear. She crossed the finish line in 30.67 seconds with her mare Diva de Semilly. Natalia Stecher tried to do the same, but was narrowly beaten with her two horses. With her two Holstein horses Eibo and Claomi she defended second and third place with a time of 31.56 and 32.52 seconds.

The gold medal in the CSIO Junior Tour, presented by High Score Performance Ground, went to Ebba Danielsson from Sweden on her Zangersheide mare T-Gavoli Z: she was clear in 27.46 seconds. Second and third place went to the Irish riders Francis Derwin and his KWPN mare Cicomein VDL (28.35 seconds) and Marta Hughes-Bravo with her Irish Sport Horse gelding Hhs Figero (28.43 seconds).

Three-time Olympic Gold medalist Charlotte Dujardin (GBR) is also in Hagen a.T.W. to support her student, British junior rider Annabella Pidgley. Charlotte was full of praise for the event, “It’s a very exciting show to come to, having the best of the best riding here is a really good preparation for the European Championships which are at the end of July. It’s fantastic for the young riders to have this experience and be involved in this kind of competition. Not many places can hold an event like this. As a rider it teaches you so much.”

All starter lists and results